On March 1, 2018, President Trump announced that the United States would be imposing a 25% tariff on steel imports and a 10% tariff on aluminum imports. The S&P 500 Index fell 2% on the news before rallying over the last two hours of trading to finish the day down 1.3%. Uncertainty extended into Friday, with the S&P 500 down over 1% early, then rallying over the remainder of the trading day to finish with a gain of over 0.5%. In this week’s commentary, we look at the potential economic impact of the announced tariffs, evaluate the equity market’s response, and, while not our base case, look at what it would take for equity market turbulence to turn into a full-blown tantrum.

DID THE MARKETS OVERREACT?

Steel and aluminum account for roughly 2% of world trade, so the expected impact of the tariffs in isolation would likely not be enough to send markets scurrying, even for a day. Early estimates see a potential impact of a 0.25% decrease in gross domestic product (GDP) for the first year the tariffs are in place, with a small contribution to inflation. But markets were not only pricing in the direct impact of the tariffs, but the rising odds of a more extended trade war and the challenges even the prospect of a trade war create for business planning.

From this perspective, the market reaction last week was reasonable and trade may be a factor that could contribute to increased volatility. However, even with tariffs, there will be winners as well as losers, with markets already picking out U.S. steel and aluminum producers as clear beneficiaries. The new tariffs would allow these industries to raise prices while remaining competitive with international producers, although higher prices could also marginally lower demand. Industries that use steel and aluminum, especially transportation (automobile and aerospace), packaging, and construction, would likely see decreasing margins due to higher input prices, while consumers would share in some of the pain due to rising prices.

We believe any potential negative impact caused by the proposed tariffs in isolation will be small.

The main threat is an escalating trade war, and rhetoric around trade could increase market volatility.

Warning signs to watch for include retaliation, a shift in the tone around NAFTA negotiations, increasing attention to intellectual property violations in China, and action by the WTO.

Even without factoring in the larger impact of a trade war, the net impact on the U.S. economy of just the tariffs could be negative. Steel production employs nearly 200,000 people in the United States, while industries that are major users of steel employ approximately 6 million. The steel industry is symbolic but small.

In addition, we have a clear case study in earlier efforts to impose steel tariffs. In March 2002, President Bush imposed a similarly sized tariff, although with exemptions for Canada and Mexico. Following threats of retaliation from the European Union (EU) and a potential $2 billion fine from the World Trade Organization (WTO), which would have been the largest penalty ever imposed, the United States lifted the tariff in December 2004.

During the period when tariffs were in place, most economic studies viewed the tariffs’ impact as negative but muted, with modest net job losses as well as a hit to economic growth. The main beneficiary was the federal government, which took in additional revenue from the tariffs, while steel-using industries and ultimately American consumers generally suffered due to artificially elevated prices. While it’s not a direct effect, the combination of increased government revenue and higher prices for consumers is why organizations like the National Retail Federation are calling the current tariffs “a tax on American families.” Expectations would be for a similar experience with the current proposed tariffs.

JUST A WARNING, BUT A TRADE WAR IS A MAJOR CONCERN

Anticipation of a trade war comes from what game theory has shown to be a simple but very effective strategy in these types of showdowns, known commonly as tit-for-tat: You raise tariffs on me and I’ll raise them on you; you lower tariffs and so will I.

The effectiveness of the strategy comes from its ability to encourage good behavior in opponents when consistently followed. This strategy is well known and easy to implement, and that’s why, historically, there have been no winners in trade wars. The complexity in the current situation is the Trump administration’s claim that the United States is several tats behind and needs to make up ground in order for free trade to also be fair trade.

Tit-for-tat breaks down only when the pain is disproportionate on one side or the other, in which case an opponent cannot respond in kind. The pain does not seem to be disproportionate in this case, and the EU’s initial threats of retaliation indicate a clear understanding of pressure points for the U.S.: They pointedly highlighted potential retaliatory tariffs on Harley-Davidsons, produced in House Speaker Paul Ryan’s home state of Wisconsin; bourbon, produced in Senate Majority Leader Mitch McConnell’s home state of Kentucky; and Levi’s blue jeans, headquartered in House Minority Leader Nancy Pelosi’s home district in San Francisco. Retaliation could also focus on industries in politically important swing states.

One place we know the pain of the steel tariffs would be disproportionately small is China. While easily the world’s largest steel producer, China is only the tenth largest exporter of steel to the U.S., accounting for only about 3% of U.S. imports [Figure 1 below]. Canada, Brazil, South Korea, and Mexico op the charts, accounting for almost half of U.S. steel imports. 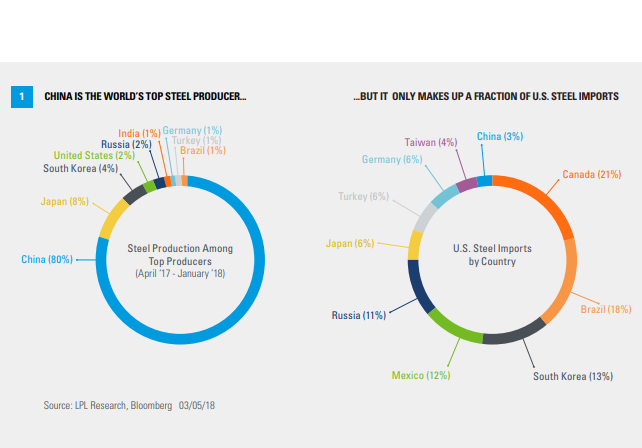 There are many ways the Trump administration can dilute the impact of the tariffs while still gaining a political victory. We think it is unlikely that Trump will blink when confronted by pressure, but he could pivot by exempting some allies, although Trump surrogates said no such exemptions were forthcoming on the weekend morning talk shows. The administration could also exempt some products, which would allow them to decrease the impact on certain countries without explicitly framing the issue in this way.

Nevertheless, it’s important to recognize that the tariffs are only one step in an emerging pattern. When Trump was elected in 2016, trade was viewed by many economists as one of the major economic risks of a Trump presidency and a position out of line with his more pro-business stance on taxes and regulation. In his first year in office, though, Trump proved to be pragmatic on trade. However, the steel tariffs are not the first sign of a course change. In a less consequential action that drew far less press, the Trump administration raised tariffs on washing machines and solar cells last month. And the current tariffs certainly may not be the end of the line, especially if there is retaliation.

It’s likely that much of the intent around the tariff proposal is not the tariffs themselves. The tariffs may be a way to apply pressure on the North American Free Trade Agreement (NAFTA) negotiations. Keep in mind that the Bush tariffs excluded Canada and Mexico due to the belief that it would violate NAFTA provisions. These tariffs, which include Canada and Mexico, may be part of an effort to win concessions.

The tariffs may also be a warning shot in the Trump administration’s upcoming decision on China’s alleged abuse of intellectual property rights under Section 301 of the Trade Act of 1974. Retaliatory tariffs as high as $1 trillion are being mentioned, which would be a shock to financial markets, although that number is almost certainly unrealistic and likely more of a negotiating stance. As discussed above, the steel tariffs would not have much impact on China, but the president’s decision on intellectual property would be taking direct aim at our trade with China. While some enforcement action seems merited, that is also where the prospect of a wider trade war really begins.

If markets were only trying to gauge the potential impact of newly announced steel and aluminum tariffs in isolation last week, they likely overreacted. However, if they were pricing in the increased prospects of an escalating trade war, we would view the response as well measured. While the United States must defend fair trade as vigorously as it defends free trade, markets dislike protectionism as much as they like deregulation and tax reform, whatever the larger merits may be. For now, expect increased volatility around potential trade risks, and, in particular, a growing focus on China’s potential abuse of intellectual property rights. Economic fundamentals do remain sound, and it appears the trade risks to date should not derail the bull market, but look for trade to continue to be a potential source of increased volatility.

The opinions voiced in this material are for general information only and are not intended to provide specific advice or recommendations for any individual. To determine which investment(s) may be appropriate for you, consult your financial advisor prior to investing. All performance referenced is historical and is no guarantee of future results.

Any economic forecasts set forth in the presentation may not develop as predicted and there can be no guarantee that strategies promoted will be successful.

Investing in stock includes numerous specific risks including: the fluctuation of dividend, loss of principal and potential illiquidity of the investment in a falling market.

Gross domestic product (GDP) is the monetary value of all the finished goods and services produced within a country’s borders in a specific time period, though GDP is usually calculated on an annual basis. It includes all of private and public consumption, government outlays, investments, and exports less imports that occur within a defined territory.

The Standard & Poor’s 500 Index is a capitalization-weighted index of 500 stocks designed to measure performance of the broad domestic economy through changes in the aggregate market value of 500 stocks representing all major industries.

To the extent you are receiving investment advice from a separately registered independent investment advisor, please note that LPL Financial LLC is not an affiliate of and makes no representation with respect to such entity